Throw Some Sauce On That

by The Bovine Fury 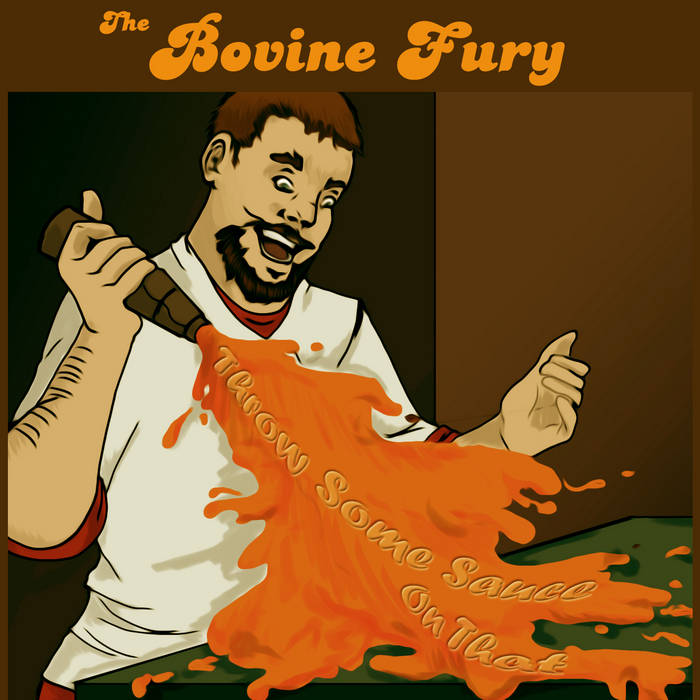 Tracks 1, 2, 4, 5, and 6 were recorded primarily at three different sessions at Mesa Community College on their Radar system. I took classes there in 1999 and ran into my old teacher at the grocery store one day. We swapped phone numbers and he called us in to record about a year later, and we did well and the kids liked us, so now every April and November we go in and record two songs. Having that deadline is a real motivator.

MCC has more gear than I could possibly list. It records to Radar. The console is a SSL, but I don’t know the model number (researching the Internet, it might be a 4056 E UV). They have more outboard gear than I could list, but they have some super expensive stuff including Manley preamps and compressors, which stood out the most to me. For the mics: The snare and toms were mic’ed with Steve Albini’s fave Josephson e22s. Kick had a Beta 52 inside. Overheads were Neumann U87s. Room mics were Coles 4038. Hi-hat was a Neumann KM184. Of course the room has a huge impact on the sound and we’re recording in a room big enough for an orchestra. Guitars were close mic’ed with two Royer r121s in stereo. Bass was mic’ed with a Neumann M149 away from the cab and a EV RE20 up close. Christine liked the EV RE20 so much that we bought a used one and use it all the time, including the stuff we did at home. We also did some vocals into the M149.

For most of those songs we also did overdubs at home. A couple we did all the vocals at home. Andy the recording teacher let me borrow one of his vintage 1970s U87s for vocals which we’re running through a DBX 286s, which was a new piece of gear we picked up for this record. In return, I let him borrow my PRS Mira for some music projects he’s working on. Track 6 I did an overdub with the guitar on the right using my Egnater Tweaker cranked up and set to what the manual told me was a “metal” setting with a basic SM57. I also did some additional guitar overdubs at the end of track 1… possibly some others?

So, that leaves tracks 3, 7, and 8 which were done all at our house (plus the vast majority of our forthcoming instrumental record). Our previous 2 records were 100% done at home, but the drums were recorded in our 11x12 bedroom we practice in. This time we moved the drums into the great room in the middle of the house which has probably 75% engineered wood flooring and 25% tile, and a vaulted ceiling probably 12 feet high at its highest. It’s a pretty big room with a nice echo. Mics on the drums were a Beta 52 on the kick, Snare and MT were Beta 56 and a Beta 58 on the FT. Overheads are some cheap but surprisingly good MXL 910s which we bought several years ago on sale for $100 for the pair, in an XY configuration. I stuck my 18 year old Rode NT1 out in front of the drums for some room sound. I should find another one of those so I can do stereo room sound. I also have some crummy small diaphragm condenser I got waaaay back and I can’t remember the make and model, but it sounds good on hi-hats and basically nothing else. Bass, we did with the RE20 close and the NT1 in the room. Guitars were close mic’ed with the NT1 and a MXL910. Vocals were done with the U87. Everything was recorded in the same Protools 8.05 LE that we bought about 10 years ago, mostly using our Focusrite Scarlett Octopre for mic preamps, except vocals which went through the 286s.

Mixing was all done by me at our house on the Protools rig. I used all stock plugins except for the Mastering on the master fader which is Massey L2007. It was a real challenge trying to get so many different tracking sessions to sound consistent with one another.

The synths are straight out of the audio output of our MicroKorg XL, so those are wave files. We mostly use the stock sounds as we never really dove into making modifications. They don’t make it easy, anyway. On track 3 I switch back and forth between playing the MicroKorg live and playing guitar. On track 5 we sampled the sound and trigger it from a Digitech Jamman live. There’s a bunch more synth on the instrumental record. Live, we set the keyboard up between Christine and I and we both play it, so it’s tough to do vocals and play the synth in a live setting because our mics are at a different spot onstage. That’s part of the reason Christine does lead vocals on New Car Smell and I only do backups when the guitar is playing.

Fun fact: the first time at MCC we did Track 2 Jerry Asterisk in our first session of the day. We did all these sessions with the drums and guitars recording together, with the amp mic’ed bass overdubbed a different day (she did direct scratch tracks while we played). So, we did a few takes of Jerry A, picked out the one we liked, and we had 10 minutes to spare, so we guerilla-style did Track 1, Filet O’Death, with time for one take only. It was very rushed and kind of crazy. At the end of the song my headphones went flying off because I was jumping around, and I butchered the guitar part, but we kept it anyway because it was in the spirit of the song and the session itself.

Special Thanks to Mesa Community College's recording programs and all the many students who assisted with this album. Andy Seagle made this possible and lent us a mic.

The Bovine Fury is a rock band from Phoenix, AZ. John, Christine and Matt have teamed up to write some songs, and play a few shows. Our first album is available for free download (or slide us a few bucks if you like it) at our Bandcamp page. You may know us from previous bands, which include Minibosses, Chief Beef, After Any Accident, and others. ... more